A Beginner’s Guide to Spiced Teas

>
Recipe: Chocolate Chai Chia Pudding
5 Inside Tips to Tea Candles
10 Teas to Enjoy with your Thanksgiving Leftovers
The Ultimate Teaware Gift Guide
The CommuniTEA: An Experience Not Just A Gift
Recipe: Bonfire Swedish Crepes
Get Festive with the Evergreen Calendar
Crash Course: Cooking with Tea Basics
Adagio's New Tea of the Month Clubs
The Best Teas To Serve at Your Halloween Party
The Best Coffee Alternative: Chicorricino
3 Easy Ways to Upgrade Your Latte
September 06, 2022 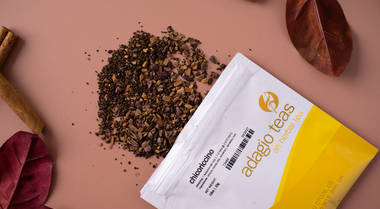 It’s fall, y’all. Or, the beginning of September, and that's close enough. It means it’s the season for spice. But did you know your seasonal favorites can also be found in tea? If not, allow us to introduce you in this beginner’s guide to spiced teas.

Spices, generally speaking, come from parts of the plant besides the leaves and flowers. Cinnamon, as an example, comes from the inner bark of the cinnamon tree. The bark is harvested and dried into long strips or “quills” which can then be cut down or ground into the cinnamon sticks and powder you find in your local store. As a flavor, cinnamon is warm without being particularly spicy, making it a great way to add warmth to anything from ciders to desserts to baked goods and, of course, tea. Though it can be added directly to drinks in stick form (a common strategy for large-batch drinks), it can also be used in spice blends or in powdered form. 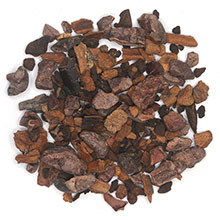 At Adagio, we use cassia cinnamon in several of our teas including our new Chicoriccino, Cinnamon, Fiery Cinnamon Spice, Cinnamon Rooibos Chai, Rooibos Cinnamon Apple, and Decaf Hazelnut Cinnamon Creme.

Cassia cinnamon is a key ingredient in our chai teas (more on that below). For mega cinnamon fans, we also offer Cinnamon on Selefina that you can use as an additive you can put in any of your favorite teas. Over at Adagio bees, you can sample our Whipped Cinnamon Honey, which goes perfectly in tea or on your morning slice of toast (alongside your morning cup of tea, of course).

Ginger comes from the root of the ginger plant. It is distinguished by its thick, pronged shape and peppery heat. Ginger is frequently praised as a cold and flu fighter as well as for other potential health benefits, making it a great addition to wellness or flu season teas. It’s also a popular cooking ingredient in dishes from around the world, from curry to sushi, sweetbreads to sodas, and even just as a candied treat in itself. 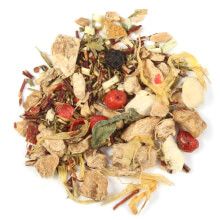 At Adagio, we have several ginger teas on hand. Our Ginger, Lemongrass Ginger, and Ginger Peach all offer more tempered options.

Go all out with our extra spicy Double Ginger. Selefina also offers Chopped Ginger Root, Crystallized Ginger, and Ground Ginger to add that extra gingery punch to any regular tea or dish.

If you’re looking to make your winter health game strong, consider having some of our Speedy Recovery on hand.

Turmeric is a close relative to ginger, featuring the same, pronged, white root exterior but with a bright splash of orangey-yellow within. It is known for its earthy flavor and bright color, which can help to either ground or bolster other elements within a dish. It is popular in Asian and African cuisine, where it is used in curries and rice dishes as well as sweets and drinks. 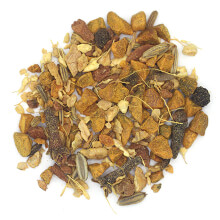 Vanilla is a flavor we’re all familiar with by now. Frequently listed as a top ice cream option, it’s also the ubiquitous flavoring you can add to almost any baked good for an instant flavor boost. What’s interesting about it as a spice, however, is that it actually straddles several spheres. For example, true vanilla comes from the vanilla orchid, which would lead some to think it belongs in the floral tea category. However, the vanilla orchid’s fruit is what is actually harvested, which would be a point for the fruity tea category. 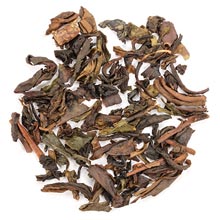 Except, since the extract is more commonly used than the bean itself, it usually winds up in the spice aisle. A tangled web indeed!

Vanilla also plays a supporting role in several of our other teas. Use our Advanced Search function to find them all.

Pumpkin spice. The supreme commander of all things Fall. At this point, this flavor probably needs little introduction, but in case you’re wondering what exactly makes your favorite tea latte so tasty, this is for you. As it happens, pumpkin spice is not just one spice, but a blend specifically designed to balance the natural sweetness of pumpkin for the purpose of treats like pies, muffins, lattes, and of course, tea. 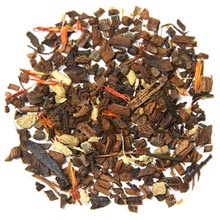 What goes in that blend, you ask? Well, recipes will vary, but common options include cinnamon, ginger, nutmeg, clove, coriander, mace, and allspice.

Can't get enough Pumpkin Pie Spice in all your drinks and foods? Selefina's new blend is sure to please. Scroll to the bottom of the page for related recipes to use this perfect blend of spiced as well!

When most people think of spiced teas, Chai is probably the first one that comes to mind. Similar to pumpkin spice, chai refers not just to a single spice, but to a blend of spices. In India, where Chai tea originated, these are known as karhas, with karha recipes varying from vendor to vendor and house to house. Chai is typically prepared with milk and sugar, again with the ratios varying wildly depending on the seller. It is typically prepared using Mamri, or CTC, tea, which is “crushed, torn, and curled” into pellets from the original leaves. 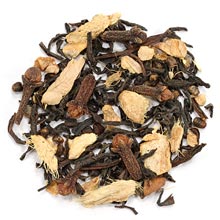 Common chai spices include cardamom, ginger, and cinnamon, though peppercorns, nutmeg, mace, cloves, and more can be added to the mix.

At Adagio, we have a wealth of chai options, with variations on anything from the spice mix to the tea used and even to the form the tea takes, a la chai tea latte mixes. Check out the Chai section of our catalog to try them all. 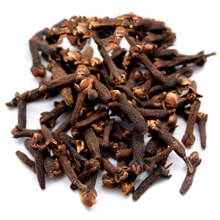 We’ve covered a lot of ground in this post, but honestly, we’ve still only scratched the spicy surface. There are a ton of other great spices out there (cardamom and clove, we’re looking at you), many of which go great in tea.

Luckily, if there’s a specific spice you love that wasn’t listed here, we’ve got you covered. Our Advanced Search function lets you search by ingredient, tea type, or even flavor profile so you can find just what suits you. Or, if you need to add that spice to your pantry, Selefina can supply you with fresh options.

Not sure what to try?

We’ve got you covered there too. We offer several starter spiced teas for you to explore, including Oriental Spice, Decaf Spice, Pu-Erh Spice, Spiced Green, or Spiced Mate (pronounced mah-tay).

Give ‘em a try, and remember, if you find a new favorite, don’t forget to let us know by rating or reviewing your teas or giving us a shout on social @AdagioTeas. Happy sipping!