Based on 2543 reviews
.
Your savings will grow with each shipment. Save 5% now, and up to 15% in the future. Please select size:
sample
$4
8oz
$9
3lbs
$34
This item has been added to your auto delivery. Visit account to manage content and timing of all deliveries.
An ideal tea sweetener, these rock sugar crystals are sugar in its purest form. If you like your tea sweet, there's no better way to impart dulcet notes to your favorite cup. Adding a few rock sugar crystals will sweeten tea without distorting its flavor profile, pleasing both your sweet tooth and taste buds. Made in Belgium from natural sugar beets.

Sugar crystals are widely used in India with aniseed as a mouth freshener, especially after meals. The two are often served alongside the check or bill in Indian restaurants. In Thailand, sugar crystals served the function of money, being easy to weight and divide into small increments. Sugar crystals were also used to make Sugar Skulls in Mexico to celebrate the Day of the Dead. Mexican children would make rock candy in the shapes of skulls by special strings and then decorate them with icing and jewels.

Show off your sugars with these brilliantly designed glass jars. An airtight stainless steel lid will keep contents fresh. 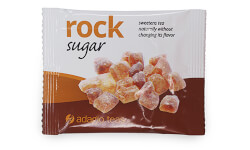 When you are on the go, why not take everything you need for the perfectly sweetened cup of tea in pre-portioned servings. Each single-serve portion of amber sugar contains approximately one teaspoon of our high-quality amber rock sugar crystals. No measuring, no muss, no fuss. Just great tea wherever you go! 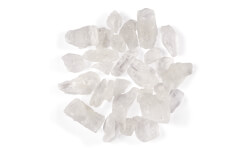 You don't need to sugar coat it for us... would you prefer crystal clear white sugar instead? No problem, we've got you covered!

Ask a question about amber sugar crystals and have the Adagio Teas community offer feedback.


Is this brown sugar?

How many ounces comes in the sample?

Does this melt in hot tea, or do I have to crush it beforehand?
C
Asked by Colby
on March 23rd, 2020
1
VIEW REPLY
HIDE REPLY

How do I get the single serving packets

Do you have a glass jar
EC
Asked by Edeltraud Clark
on October 16th, 2021
1
VIEW REPLY
HIDE REPLY

January 22, 2022
My products were delivered to me faster than expected. The tea tasted spectacular! They even gave me free sample teas. 10/10! Would buy f...
Ask us a question.
Anytime!
Questions?
Adagio Chatbot
You may ask me "Where is my order?" or "How much is shipping?" and I will gladly answer your question.
If you don't like my answer, our customer support team will email you a reply shortly. Ask me!
>
.