Based on 588 reviews
.
Your savings will grow with each shipment. Save 5% now, and up to 15% in the future. Please select size:
blush
17oz
$34
charcoal
17oz
$34
lemongrass
17oz
$34
infuser
replacement infuser
$6
seal
returning end of 2022
NOTIFY ME
This item has been added to your auto delivery. Visit account to manage content and timing of all deliveries.
Enjoy more tea on the go with our 17 oz travel infuser. Its double-walled stainless steel construction will keep your tea quite hot (or cool, if you prefer) for hours. Spring-loaded lid opens easily with just one hand, allowing drivers to keep the other safely on the steering wheel. Sliding easy-click lid-lock prevents accidental openings. Fits most car cup holders.

To use: fill three-quarters of the way with water (water level below the removable stainless steel infuser) and place leaves inside the infuser basket. Flip the unit upside-down for a thorough, flavorful infusion. Once infused, flip right-side-up to separate spent leaves from water and prevent your tea from turning bitter. Travel far and wide with quality freshly-brewed tea!

Please note: This tumbler is exceptionally well insulated, with a vacuum-tight seal. It will keep your tea very hot, sometimes for several hours. Please sip carefully to avoid burning your mouth! In addition, be sure to open the cap away from your face when the tea has been steeping, to avoid any escaping pressurized steam. 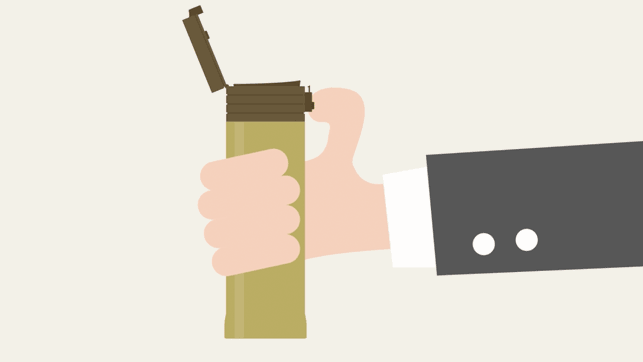 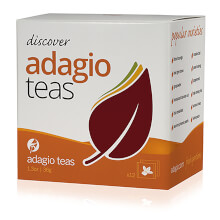 Enjoy great teas on the go with our convenient portion packets. Each holds the right amount of leaves to place inside your travel tumbler. Simply rip, pour and steep, with nothing to measure or clean. Try a sampler containing these 12 teas:

Ask a question about toasTEA and have the Adagio Teas community offer feedback.

Does the flip top get in the way of drinking the tea? I.E. will I have the lid pressed up against my face each time I sip?

Is the infuser included?

Can anyone describe the lemongrass color? It sounds like it should have a greenish hue but online it just looks gold. Maybe it's a greenish gold color? Thank you in advance.

Since you apparently fill this 3/4 the way with water so that when upright the tea leaves are out of the water, is the 17oz capacity the amount of water you actually put in the tumbler or the total capacity if filled to the fullest?
KS
Asked by Karl Sumwalt
on August 3rd, 2017
1
VIEW REPLY
HIDE REPLY

Is it BPA free?

Probably a dumb question but, can it hold coffee too? :)

Can milk and sweetener be added easily?

After a year of use, I've noticed the tea is staining the inside of the mug, and the infuser basket. Is there a best practice for cleaning this?

What is the diameter of the tumbler? My cup holders are a bit smaller than most.
TC
Asked by Thomas Carlton
on June 2nd, 2017
1
VIEW REPLY
HIDE REPLY

Does the infuser work with finer teas like roobios and mate, or are the holes too big?

When travelling with the bottle after infusing, should I keep the infuser there or removing it before?
GD
Asked by Guy Dino
on February 18th, 2020
1
VIEW REPLY
HIDE REPLY

Could I use the infuser with fruit as well or no? Because I love fruit infused water
JS
Asked by Jordon Stottlemyer
on April 29th, 2020
1
VIEW REPLY
HIDE REPLY

Which way does the replacement gasket go in? I use this thermos daily and needed to replace the gasket. I have it but it always come out and won’t stay in place. Which way does it go in?
CZ
Asked by claire zelasko
on May 3rd, 2020
1
VIEW REPLY
HIDE REPLY