Based on 99 reviews
.
Your savings will grow with each shipment. Save 5% now, and up to 15% in the future. Please select size:
sample jar
1.2 oz
$3
6oz pouch
out of stock
NOTIFY ME
16oz pouch
$14
ACCESSORIES
glass jar 24oz
jar only
$14
This item has been added to your auto delivery. Visit account to manage content and timing of all deliveries. 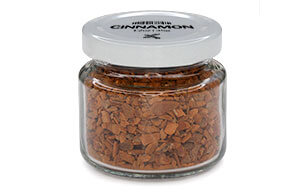 Sweet hot cinnamon has graced Egyptian temples and found favor in Greek mythology. Harvested from the inner bark of Cinnamomum trees, it is used for incense, candles, baked goods and beverages with its warming nature. It may be helpful in lowering blood sugar and cholesterol as well as offering anti-inflammatory effects. In tea blending, it's the belle of the ball as it goes so well with so many flavors, adding sweetness and gentle heat.

Origin: Vietnam | We recommend referring to a healthcare practitioner before using herbs and spices, especially if you are pregnant, nursing, or on any medications.

Take your blending game to the next level. Use the GritTEA to transform whole spices into flavor-rich, fine-grained inclusions. Easy to operate, works with a variety of sweet and savory spices.
gritTEA grinder
perfect for spices
$39

Show off your spice assortment with these brilliantly designed glass jars. Borosilicate glass will block UV rays from harming the content. An airtight stainless steel lid will keep spices fresh.

Ask a question about cinnamon inclusion and have the Adagio Teas community offer feedback.


Is Cinnamon inclusion a tea or just something to add to a tea?

Which cinnamon is this - Cassia, Vietnamese, Ceylon, Other?

What kind of cinnamon is this? Cassia or Ceylon? Please let your customers know what kind of this cinnamon?
PC
Asked by Ping Ha Chiu
on July 15th, 2017
1
VIEW REPLY
HIDE REPLY

How much is included in the sample size?
AS
Asked by alexis smith
on April 12th, 2018
1
VIEW REPLY
HIDE REPLY

What is the caffeine content of cinnamon inclusion?
TA
Asked by Terry Alberts
on December 18th, 2019
2
VIEW REPLIES
HIDE REPLIES

Hi I sent a message requesting Cinnamon Inclusion, but got a message back regarding cinnamon pieces. Is that the same thing or did someone misunderstand?
ET
Asked by Elliott, Theresa
on March 28th, 2021
1
VIEW REPLY
HIDE REPLY