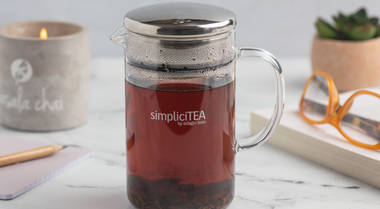 In the first part of this series on estimating water temperature, we looked at a method of gauging the temperature of the water as it heats up. The second part of the series will be focused on the opposite: how quickly the water cools down, and which factors affect this process. To do that, we turn to physics!

In thermodynamics, conduction and convection are two methods by which heat is transferred between objects. Conduction refers to heat that is transferred through direct contact—think of the bottom of a tea kettle touching a hot stovetop. Convection occurs through the movement of individual atoms in a liquid or gas. A convection oven, for example, maintains a consistent temperature by circulating air with a fan.

The first instance of heat loss we’re going to look at occurs when you pour water from the kettle into another vessel. What we are actually calculating here is the amount of thermal energy that is transferred via conduction from the boiling water to the teapot by the time they reach the same temperature, i.e. once thermodynamic equilibrium is achieved. In order to make this calculation, we’re going to need to make a few assumptions.

First, we’re going to say that the water in the kettle is exactly 212°F (100°C) right as you take it off the stove. Second, we’re going to assume that the teapot (or other containers you are using to steep the tea) is at a standard room temperature of 68°F (20°C).

The heat transfer formula allows us to figure out how much thermal energy is transferred based on three variables: mass, specific heat (a property unique to the material of the teapot), and the change in temperature. Since there is a lot of variation among teapots and mugs, I’ve done the calculations for a handful of Adagio items of different sizes and materials. You can use this table as a reference by looking at the final temperature of the item that is closest to the one you are using at home. 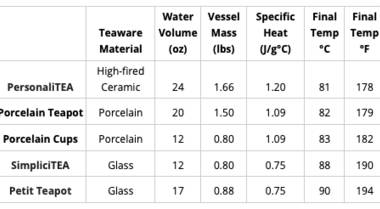 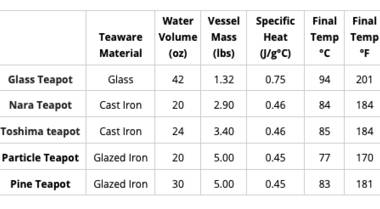 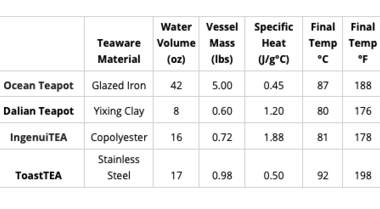 The second instance of heat loss occurs as the teapot and water cool off over time. This is referred to as convective cooling. The vessel transfers heat to the air around it, but the circulation in the room causes that heated air to be replaced with cooler, room temperature air. The process keeps going until the vessel cools to room temperature. The calculation for this process is much more complicated, so instead, we’re going to focus on some general rules and factors to keep in mind.

Just like in the conduction example, the material of the teapot or mug has a significant effect on how fast it cools off. The property that matters most, in this case, is thermal conductivity. A material with high thermal conductivity (such as copper) transfers heat very well, which means that it would cool off much more quickly than something with low thermal conductivity, such as glass.

However, cast iron pots tend to be much thicker than similarly sized glass pots, which makes the cast iron pot much more effective at retaining heat. The size of the vessel also affects cooling time. Since a greater surface area allows the vessel to come in contact with more of the surrounding air, it will lose heat at a much faster rate than a smaller vessel of the same material.

You can limit how much your tea drops in temperature as it steeps by following a few tips. In traditional tea ceremonies, the teapot and cups are filled with hot water that is emptied out before steeping. This minimizes the drop in temperature from the first scenario we looked at. If you are using a bigger pot, you can cover it with an insulating material such as a kitchen towel. With these tips and some thermodynamic know-how in mind, you are one step closer to enjoying that perfect cup of tea!

August 5, 2020
Quality product delivered quickly.
Ask us a question.
Anytime!
Questions?
Adagio Chatbot
You may ask me "Where is my order?" or "How much is shipping?" and I will gladly answer your question.
If you don’t like my answer, our customer support team will email you a reply shortly. Ask me!
>
.