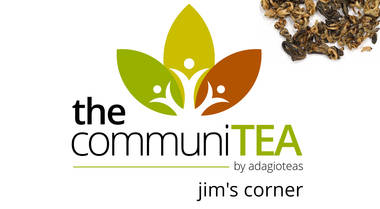 We were lucky enough to have Jim write up his thoughts on his favorite tea from recent boxes, so without further ado- we give you ...


My communiTEA packet on January 14th included 2 ½ teaspoons of Assam Melody tea. I used 1 ½ teaspoons of the tea in my 12 ounce Yixing clay mug that I use only for black unflavored teas, pictured below. 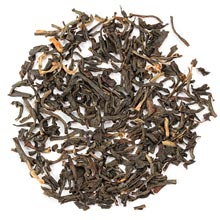 I steeped at 200ºF and pulled it at four minutes when it was dark enough for my liking.

When hot, a mild unsweetened cocoa astringency was noted. Mild mineral tastes were present on the roof of my mouth. I added a bit of sugar to mellow the flavor. When warm, mild pecan flavors surfaced with an acceptable amount of brisk astringent mouthfeels.

This was a very nice stand-alone sip, but I feel it is even better when used in a breakfast blend, such as Scottish Breakfast. (Brewed at 4 mins, 200°F, 1/4 tsp sugar) 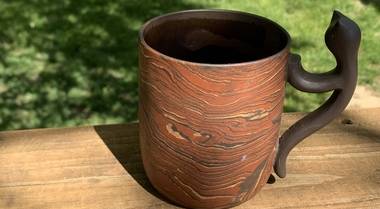 
As far as I could tell, everybody was present in my Tiger Eye tea and ready for action in my communiTEA packet on January 27th. The cocoa nibs were getting excited! Dark chocolate aromas were noted. 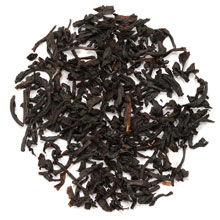 I did a 200°F steep to help stave off any astringency from the Ceylon Black tea. I pulled the steep at 3 minutes and 30 seconds because the tastes were getting a little bitter (probably from the cocoa nibs).

Towards the end, the tea conspired with the chocolate dudes to intensify the overall chocolaty goodness. I thought I was drinking a Milky Way candy bar by the time I had my last sip, very nice! The 2nd steep was milder in taste, but still very pleasant. (Brewed 3 mins 30 secs @ 200°F, 3/8 tsp sugar)


When I noticed carefully hand-rolled large black tea leaves with golden tips and buds in my communiTEA packet on April 24th, I got so excited. I had a feeling that Yunnan Noir was gonna be worthy of using my Yixing clay “cat-handled” black tea mug for a good ‘ol fashioned tea tastin’! 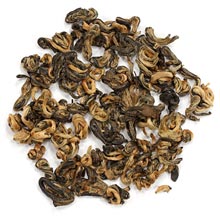 I had four grams of tea, enough for a 16 ounce steep. I steeped this special black tea at 200°F in order to treat it gently and avoid too much astringency. I pulled the steep when most of the leaves had fully opened and fallen to the bottom of my steeper. They were large, flat, and very stately looking.

When hot, mild unsweetened dark cocoa flavors were noted. A slight astringency was noted. Since this was a 16 ounce steep, I added ⅜ teaspoon of sugar to lower bitter tastes and help reveal other flavors.

The flavor of this tea when warm was very complex, with mild to moderate hints of honey, earth, molasses, raisin, and other fruit flavors.

Throughout my sip, this tea was savory and wine-like tasting on my palate. A pleasant fruity astringency and an immense depth of flavor were noted. I was presented with a clean and mildly sweet dark cocoa-flavored finish. The second and third steeps were just as flavorful. (Brewed 4g tea for a 16oz steep, 3 mins, 200°F, ⅜ tsp sugar.)

September 12, 2021
Fantastic flavor and service. Not only did they send our teas but they sent a free sample of their current seasonal flavor and some rock ...
Ask us a question.
Anytime!
Questions?
Adagio Chatbot
You may ask me "Where is my order?" or "How much is shipping?" and I will gladly answer your question.
If you don't like my answer, our customer support team will email you a reply shortly. Ask me!
>
.