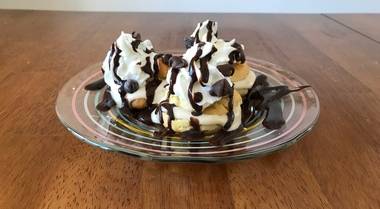 Hello everyone! Today we’re back in the kitchen with a tasty trifecta of kitchen classics: Chai, Bavarian cream, and profiteroles.

Chai tea is a tea made from black tea and spices like cinnamon, cardamom, and ginger. It’s most often made with milk and sugar, a la the perennial favorite chai latte, or, as is the case with our Chocolate Chai.

Bavarian cream is a custard-like dessert that can come either in a molded shape or as a filling for treats like donuts, cakes, pies, or trifles.

Profiteroles are pastry puffs made from choux dough, which rises and hollows out while baking. They are often cut in half to make cream puffs, though they can also be filled with jams, mousses, chocolates, or custards.

Since it takes the longest to make, we suggest starting with the Bavarian cream. We adapted our recipe from this one on Happy Money Saver. Our full recipe is available below and here on TeaChef. 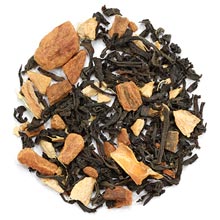 To get started, mix all of your dry ingredients together in your saucepan. Once those are well-mixed, you can start slowly adding your milk, followed by your whisked egg yolks. Bring everything up to medium-high heat, stirring constantly until you have a pudding-like consistency.

Pro tip: When we say to stir constantly here, we really mean constantly. It may be tempting to multitask while this is cooking, but if you leave the pudding for too long, a layer of the pudding will form along the bottom of the pot. This can result not only in having burned pudding pieces in your final product but also in preventing the mixture on top from cooking properly. Not that we’re speaking from experience or anything….ahem.

Once your pudding is done, add the butter and vanilla, mixing until the butter is fully melted. Put the mixture in the fridge to cool.

In a smaller saucepan, scald your whipping cream. Once it’s hot, add your Chocolate Chai tea and (optionally) a few chocolate chips, making sure to stir the cream until the chocolate chips are melted. You can add a little extra tea if you want, but be careful not to overdo it, as too much, burned, or over-steeped tea will result in a bitter flavor. Steep for three minutes and then strain out the tea leaves. Put the mixture in the fridge to cool.

While you wait for your Bavarian cream elements to cool, make your profiteroles. For those, you can follow any recipe you like, though we liked [https://sallysbakingaddiction.com/choux-pastry/] this one from Sally’s Baking Addiction, which also had a nice video to show what the dough should look like at any given stage. If your dough gets too runny, just add flour. 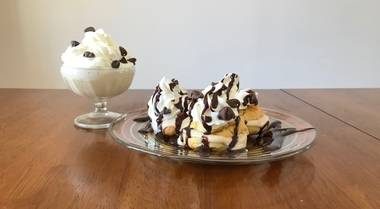 Bavarian cream is a common filling for anything from cakes to pies, cupcakes, donuts, cream puffs, and more. In this recipe, we pair classic Bavarian cream flavors with a subtle chocolate chai finish.


Makes: Filling for 40-50 profiteroles
Time to make: ~1 hour, plus time for ingredients to cool


Mix all dry ingredients in a saucepan. Slowly add the milk.

Whisk the egg yolks and stir into the pudding mix. Boil at medium high, mixing constantly until mixture has a pudding like texture.

Mix in the butter and vanilla until butter is melted.

Put the pudding in the fridge to cool.

In another saucepan, scald the whipping cream before removing from the heat.

Strain out the tea leaves

Put the whipping cream in the fridge to cool.

Fold the whipping cream into the pudding mixture.

Once complete, the Bavarian cream can be added to cream puffs, profiteroles, pancakes, and more. It is also a nice treat on its own or topped with fruit, chocolate chips, chocolate sauce, or whipped cream.

Note: If you want a stronger flavor, you can use more chai tea, but don’t go overboard, as too much, oversteeped, or burned chai will make the whipping cream bitter.

Note: Be careful to stir the pudding mixture continuously to avoid burned pudding on the bottom of the pan.

Chocolate Chai is this month’s TeaChef recipe competition! Head over there to submit your own creations to potentially win a $50 gift card to Adagio!

May 3, 2021
Arrived quickly and am satisfied!
Ask us a question.
Anytime!
Questions?
Adagio Chatbot
You may ask me "Where is my order?" or "How much is shipping?" and I will gladly answer your question.
If you don't like my answer, our customer support team will email you a reply shortly. Ask me!
>
.