by Sarah Almon
What the hell is a Colita? Google it, its NOT a flower. ;) This tea is a flavorful blend of tropical flavors, berries, and a light citrus splash, taking us back to Hotel California with one sip. Blended specially for my very best friend in the world, LeAnn... the kind of best friend everyone wants, just in case it all falls to pieces tomorrow.

Low caffeine | Steep at 190° for 3 minutes.
Signature blends are not eligible for returns. 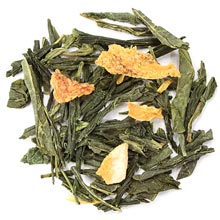 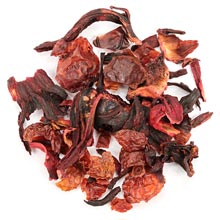 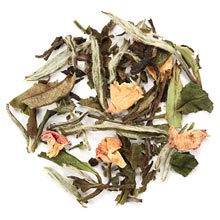 [ Haunting guitar intro. ] On a dark desert highway, cool wind in my hair, Warm smell of Colitas [ 4 ] rising up through the air. Up ahead in the distance, I saw a shimmering light. My head grew heavy and my sight grew dim, I had to stop for the night. There she stood in the doorway; I heard the mission bell. And I was thinking to myself, 'This could be Heaven or this could be Hell.' Then she lit up a candle and she showed me the way, There were voices down the corridor, I thought I heard them say, ('Welcome to the Hotel California.) Such a lovely place. (Such a lovely place.) Such a lovely face. There's plenty of room at the Hotel California. Any time of year (any time of year), You can find it here.' Her mind is Tiffany [ 5 ] -twisted, She got the Mercedes-Benz [ 6 ] , ungh. She got a lot of pretty, pretty boys, That she calls friends. How they dance in the courtyard, sweet summer sweat. Some dance to remember, some dance to forget. So I called up the Captain, 'Please bring me my wine.' He said, 'We haven't had that spirit here Since nineteen sixty-nine.' ((And still those voices are calling from far away,)) Wake you up in the middle of the night, Just to hear them say, ('Welcome to the Hotel California.) Such a lovely place. (Such a lovely place.) Such a lovely face. They're livin' it up at the Hotel California. What a nice surprise (what a nice surprise), Bring your alibis.' Mirrors on the ceiling, Pink champagne on ice. And she said, 'We are all just Prisoners here, of our own device.' And in their master's chambers, [ Find more Lyrics at www.mp3lyrics.org/ar ] They gathered for the feast. They stab it with their steely [ 8 ] knives, But they just can't kill the beast. Last thing I remember, I was running for the door. I had to find the passage back To the place I was before. 'Relax,' said the night man, 'We are programmed to receive. You can checkout any time you like, But you can never leave!' [ Instrumental coda to end. ] [ HOTEL CALIFORNIA [ 1 ] [ Written by: Don Felder, Glenn Frey & Don Henley Performed by: The Eagles [ 2 ] -1976 (Lead vocals: Don Henley) Appears on: Hotel California (LP)-1976, Eagles Live-1980, The Legend of Eagles-1988, Hell Freezes Over (CD-Live)-1994 [ 3 ] & (DVD-Live)-2000, The Complete Greatest Hits (Warner-CD)-2003 & (Rhino-CD)-2006, The Very Best of the Eagles (WSM-CD)-2003, (Warner-CD/DVD)-2003 & (Elecktra-CD)-2007, et al. ] [ 1 ] This song is generally understood to be an allegory about hedonism and self-destruction in the Southern California music industry of the late 1970s; Don Henley called it, 'our interpretation of the high life in Los Angeles.' and later reiterated, '... [ i ] t's basically a song about the dark underbelly of the American dream and about excess in America, which is something we knew a lot about.' ] [ 2 ] A few notable covers: Alabama, The Desperados, Glen Duncan, Los Fernandos, The Gypsy Kings, Don Henley (solo), Ray Horton, William Hung, Pennywise, Wilson Phillips, The Royal Philharmonic Orchestra, Billy Vaughn, and dozens more. ] [ 3 ] Transcribed from the track on this album. ] [ 4 ] Both Don Henley and Don Felder have repeatedly and publicly stated that Colitas are, 'heady desert flowers.' Others assert that 'colitas' is a Spanish term for 'little tails,' which is a reference to the buds of the Cannabis plant.' ] [ 5 ] Louis Comfort Tiffany was an American artist and designer who worked in the decorative arts and is best known for his work in stained glass windows and lamps, and is the American artist most associated with the Art Nouveau and Aesthetic movements. ] [ 7 ] [ 6 ] Mercedes-Benz is a German manufacturer of luxury automobiles, buses, coaches, and trucks. ] [ 7 ] [ 7 ] The above two references, [ 5 ] & [ 6 ] , are all about materialism: Tiffanys for expensive jewelry, Mercedes for expensive cars. Such luxuries can distort perspectives and foster temptation, greed and over indulgences. The words 'Benz' (or its homophone, bends) coupled with twisted is a great play-on-words and metaphor for distortion. ] [ 8 ] The use of the word steely, was a playful nod to the band, Steely Dan, who had included the lyric 'Turn up the Eagles, the neighbors are listening,' in their song, Everything You Did, according to Glenn Frey's liner notes on, The Very Best of the Eagles. ]

September 16, 2021
I love Adagio Teas
Ask us a question.
Anytime!
Questions?
Adagio Chatbot
You may ask me "Where is my order?" or "How much is shipping?" and I will gladly answer your question.
If you don't like my answer, our customer support team will email you a reply shortly. Ask me!
>
.