>
5 Inside Tips to Tea Candles
10 Teas to Enjoy with your Thanksgiving Leftovers
The Ultimate Teaware Gift Guide
The CommuniTEA: An Experience Not Just A Gift
Recipe: Bonfire Swedish Crepes
Get Festive with the Evergreen Calendar
Crash Course: Cooking with Tea Basics
Adagio's New Tea of the Month Clubs
The Best Teas To Serve at Your Halloween Party
The Best Coffee Alternative: Chicorricino
3 Easy Ways to Upgrade Your Latte
10 Teas to Help with Studying
September 27, 2022 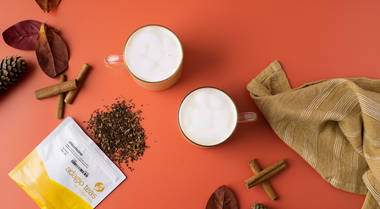 Do you enjoy the full-bodied taste and aroma of coffee, but not the jitters or caffeine crash? Well, you are in luck! Adagio Teas has a delightful chicory-based blend to satisfy your coffee craving.
With notes of cocoa and cinnamon, and the nuttiness of dandelion root, Adagio’s Chicoriccino blend is a perfect low-caffeine cold-weather sipper.

Chicory, the main ingredient in Chicoriccino, is a plant in the dandelion family. The roots are roasted and chopped or ground, and have a flavor often described as earthy or nutty. Chicory use is said to have originated in the 1800s during a coffee shortage in France. With its similar flavor profile, the roots were used to either stretch out a coffee supply, or replace it altogether.
Adagio’s Chicoriccino goes a step further than just chicory. With cinnamon and cocoa, Chicoriccino hits all the comfort notes to warm your soul and relax frayed nerves.

Chicory can be over-steeped, so this blend asks for specific timing and temperatures.

Adagio suggests a short brew, 1 to 3 minutes, at 212°F for a strong cup. Or, if you want to lessen the astringenty-coffee vibes try to steep for 3 minutes at 195°F instead. After a few cups, you’ll find your favorite way to brew it.

Remember to prepare the this tea like you would take your coffee!


The ingredients in this blend may offer some health benefits for the drinker!

This spice, harvested from the inner bark of a tropical evergreen plant, has been found to lower blood sugar levels and improve cholesterol levels.

Cinnamon also contains the same powerful antioxidant that is found in blueberries, red wine and chocolate. Antioxidants are compounds that help neutralize free radicals — molecules that are a product of normal metabolism but contribute to chronic disease risk if levels get too high in your body. Antioxidants are important for keeping your body healthy.

Cinnamon is said to have some effect on plaques and other causes of Alzheimer’s Disease and dementia. The good news doesn’t stop there – this delicious spice has also been associated with cancer-fighting properties in rodents, anti-parasitic effects, improved diabetic neuropathy, lower blood pressure, and wound healing, including liver damage.

Dandelions aren’t just a weed in your yard or garden. The entire plant is edible, and the root is rich in the carbohydrate inulin, a type of soluble fiber found in plants that supports the growth and maintenance of healthy gut bacteria in your digestive tract. Dandelion is also a traditional medicine often used to improve digestive health.

Scientists are still looking into dandelion’s anti-inflammatory properties, and its potential to aid in blood sugar management.

Because chicory root is a relative to dandelion, it has many similar health benefits.

It is considered a prebiotic, which means that it feeds the beneficial bacteria in your gut. These helpful bacteria play a role in reducing inflammation, fighting harmful bacteria, and improving mineral absorption. Like dandelion, chicory will help improve digestive health.

Blood sugar control is another benefit of chicory. Inulin, which aids breaking down carbs into sugars and increases the body’s sensitivity to insulin, the hormone that helps absorb sugar from the blood, is found in chicory root, and is released during the steeping process. This may also support weight loss. 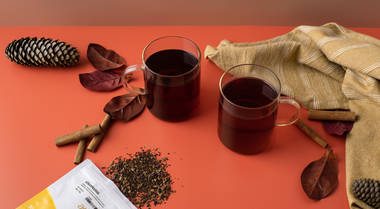 Adagio’s Chicoriccino blend can be used to replace coffee in some recipes. By brewing a strong cup (or pot), baked goods, cakes and icings that call for brewed coffee can crafted with low caffeine Chicoriccino instead.

Enjoy Chicoriccino the same way you enjoy your coffee. With milk and sugar, or blended into a café mocha or latte – there’s no end to the ways Chicoriccino will complement your menus.

Try sweetening the warm flavors with one of Adagio Bees' raw honeys. Whipped Cinnamon will bring out the cinnamon notes, while the Whipped Chocolate will float those cocoa notes to the surface. And Adagio Bees' Raw Garden Herbals will add the perfect touch of overall sweetness.

Chicoriccino is available loose, in various amounts, and in tea bags. Happy steeping!