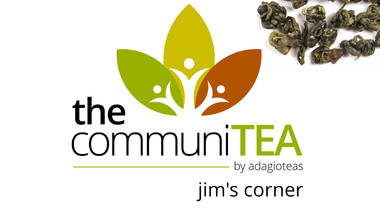 We were lucky enough to have Jim write up his thoughts on his favorite tea from recent boxes, so without further ado- we give you ...


Today I have reviewed three green teas for your enjoyment. 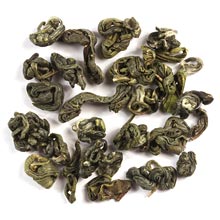 Tiny dark green curled-up dragons were found sleeping in my communiTEA packet on February 18th. They were really cute, but would soon be awakened! I proceeded with my Sleeping Dragon with caution.

I wanted to awaken my little dragons slowly, so I pulled my steep at two minutes and 30 seconds when I noticed that they were stretching-out and had fallen to the bottom of my steeper. I wanted them to save their energy for subsequent steeps. They were awake, excited and starting to snort smoke!

When hot, green vegetal flavors were smoky and mild. These tastes were very clean and lite. I decided not to spoil my dragons by adding sugar.

When warm, green vegetal flavors smoky tastes were moderate. A pleasantly mild, and acceptable amount of astringency was noted.

This tea is a very refreshing any time of the day sip. It would be a great choice for those folks who do not like grassy tasting green teas. After a second steep, my little tea dragons were grown up and had even more flavorful tastes than were noted above. You can get at least three steeps from this tea. Good little dragons! (1st steep: 2 min 30 secs/Subsequent steeps: 2 mins @ 175ºF, no additions)


It looked like a bunch of herbs and spices had escaped from my spice pantry and into my March 11th communiTEA packet overnight! The ingredients in my Speedy Recovery packet were jiggling with excitement. Strong peppermint aromas were noted. 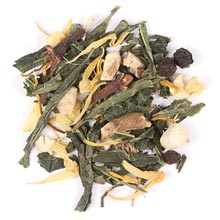 When hot, there was an appropriate amount of moderate astringency from the licorice and fennel that caused the back sides of my tongue to curl and pucker! The licorice stick I noted in my packet earlier was really doing a number on me! Mild peppermint, clove and ginger flavors were noted, Black peppercorns supplied moderate zings on my taste buds. I added ¼ teaspoon of sugar to sweeten things and bring out more flavors.

Towards finish, the green tea provided a buttery smoothness that melded all players into a very pleasant multi-layered sip! This blend was a fine display of different spice and herb flavors, and how well they can combine their efforts into one pleasant drink!


There appeared to be 75% peppermint leaves and 25% Spring Darjeeling tea in my March 23rd Casablanca Twist communiTEA packet. Normally this Darjeeling has long and skinny twisty leaves. But, today they were crushed to fit into the packet, I reckon. The “Twist” was not present today! 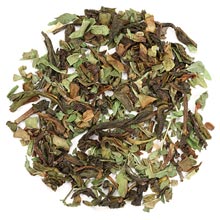 I have the Spring Darjeeling on the shelf, and have determined that a 200°F steep for two minutes was best to avoid too much astringency from this tea because this Darjeeling is more like a green tea than a black tea. So that’s what I did. I had exactly three grams of tea in my packet, just enough for a 12 ounce steep. Upon steep completion, I decided not to do the Moroccan long pour into my mug. That would have been a total mess!

When hot, peppermint flavors were pleasantly strong. A slight, but appropriate amount of astringency was present from the Darjeeling. Mineral tastes were moderate. I decided to jack the amount of sugar up to ½ teaspoon today to make this an almost authentic Moroccan drink. Authentic Moroccan tea would have a ton of sugar in it.

When warm, the amount of sugar I added was just the proper amount needed without being cloyingly sweet! Mild, but distinct muscatel flavors of the Darjeeling were noted. A mild buttery mouthfeel was noted. Moderate peppermint flavors did not overpower the Darjeeling. They worked very nicely together.

Towards finish, a crisp sparkling mouthfeel was noted all the way to the end. A second steep was pleasantly mild in flavors. This blend would make a great drink to sip after partaking in a nice herbalicious bowl of Moroccan Harira. This was a very nice drink indeed. (2 mins @ 200°F, ½ tsp sugar)

May 4, 2021
Adagio has always been, and still is awesome. No matter what I order, I always get the best. If I have a problem, they fix it. Period. Ab...
Ask us a question.
Anytime!
Questions?
Adagio Chatbot
You may ask me "Where is my order?" or "How much is shipping?" and I will gladly answer your question.
If you don't like my answer, our customer support team will email you a reply shortly. Ask me!
>
.