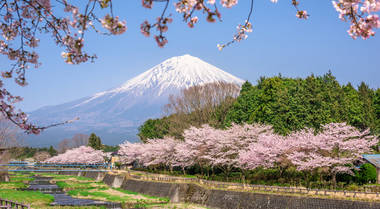 When you’re first getting into tea, the learning curve can be a little steep. What’s the difference between a black and white teas, Rooibos and Pu-Erh, teas and tisanes?

There’s a lot to learn, and while each one of those questions could be a post on its own, today we’re going to zero in on another tangled tea question: the Japanese tea family tree.

To get started, let’s look at tea in Japan generally.

In Japan, only small leaf tea is grown, which is then exclusively processed into green tea using a steaming and rolling process that is unique to Japan. Japanese teas are generally known for their grassy, vegetal flavors, cylindrical leaves, and bright green colors, though the way they are processed post-harvest will affect all of those attributes.

In Japan, there are two broad techniques for growing tea, shade-grown or uncovered. Shade-grown teas are further distinguished by the amount of time they are shaded for or the processing done to them after harvest. Uncovered teas are separated by processing techniques, added ingredients, or flush (harvest).

So, now that we’ve got the basics covered, let’s get to the teas. 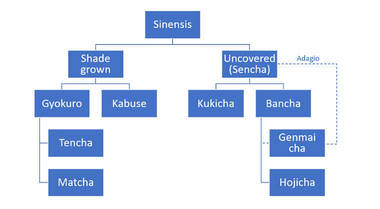 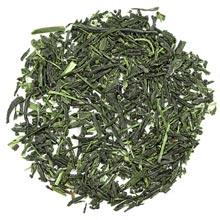 Gyokuro is one of Japan’s most popular and finest teas. It is shade-grown for several weeks, during which the growth of the leaves is slowed. This gives the flavors more time to develop, while also increasing the leaves’ chlorophyll (leading to a bright green leaf color), amino acids, and theanine. Gyokuro has a rich, gentle flavor without the grassiness for which most green teas are known.

Tencha serves as an intermediate step between Gyokuro and Matcha. Like Gyokuro, it is shade-grown for several weeks. However, once harvested, it doesn’t go through the usual rolling process. Instead, the leaves are de-stemmed and de-veined, leaving only the pure green tea leaves for Matcha production. 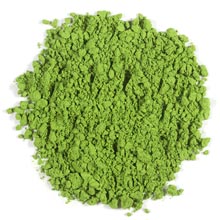 Among westerners, Matcha is probably the most well-known Japanese tea. Made by grinding Tencha into a fine powder, it comes in multiple grades based on intended use (ex: cooking or a traditional Japanese tea ceremony). The powder is then whisked into hot water using special matcha or chawan bowls and a matcha whisk. Because the whole leaf is used in the final product, Matcha is extremely high in caffeine compared to other green teas since you ingest the entire leaf and it is ground into a powder form. It is well known for its grassy flavor but is also often used in cooking or baking, where it is paired with lighter, sweeter flavors like white chocolate or berries.

Kabuse is another shade-grown tea. The only difference is that it is not shaded for as long as Gyokuro. 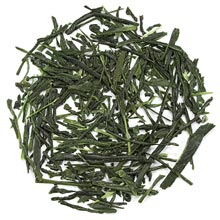 Sencha is the most popular tea in Japan. It is harvested in two flushes, with the first being harvested in Spring and the second being harvested in Summer or Fall. First flush Sencha, which is called either Sencha or Shincha, is known for its high quality and delicate flavor. Second flush Sencha, also known as Bancha, is known for its more robust brothy flavor. As such, it is often used for the creation of other, further processed teas such as those listed below. 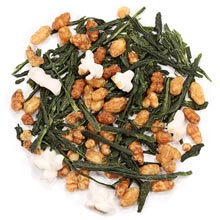 Genmai Cha is a tea traditionally made by adding puffed rice to Bancha. At Adagio, we use higher grade Sencha, though other varieties also exist, some even including Matcha (Matcha-iri Genmai Cha). Originally created as a way for the lower classes to stretch thin tea supplies, it has since gained popularity among all classes for its rich, roasted rice flavor. Because of its history and appearance, it is sometimes also known as “people’s tea” or “popcorn tea.” 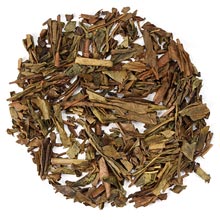 Hojicha is roasted tea. It is most commonly made by roasting Bancha over a fire in a porcelain container. As a result, the leaves turn brown, change the flavor, and lose some of their caffeine (making it a great nighttime option). As opposed to a grassy flavor, as most green teas have, Hojicha is categorized by nuttiness, warmth, and a slight hint of smoke. 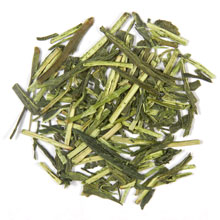 Kukicha, also known as bocha or “stick tea,” is made by adding tea stems to Sencha (though it can also be made from Bancha, Gyokuro, or even Matcha). The result is a light, sweet, and nutty tea with low astringency.

As a final fun fact, you may have noticed that a lot of these tea names end in “cha.” That’s because “ocha” is the way to say tea in Japanese. And, since almost all tea served in Japan is green tea, if you ask for ocha, you will be served green tea instead of black tea, as is common in the West!

So, there you have it. We hope you’ve enjoyed this overview of the Japanese tea family tree. Though they’re all a little different, we guarantee each one is worth a try. If you decide to branch out and try something new, or even just learned more about an old favorite, don’t forget to let us know by rating and reviewing our teas on Adagio.com or by reaching out on social @Adagioteas. Happy sipping!